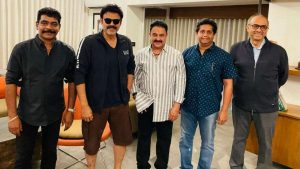 The Malayalam thriller film of Mohan Lal under the direction of Jeethu Joseph was a really big blockbuster. This movie was also made in Tamil, Telugu, and Hindi. Sri Priya directed the Telugu version and Victory Venkatesh played the lead role in this film. ‘Drishyam’ in Telugu was also really successful. Recently the sequel to ‘Drishyam’ was released in Malayalam on the OTT which received yet again a positive response. A question was raised due to this, whether ‘Drishyam 2’ will again be made in Telugu as well. Answering this question the producer Suresh Babu and actor Venkatesh met the film director Jeethu Joseph and the producer Antony Perumbavoor. Right after the meeting, the producer Antony Perumbavoor tweeted right away that ‘Drishyam 2’ will be made in Telugu. The shoot of this film is supposedly going to begin in March and the crew plans on completing the shoot in just about 2 months.

Super Star In No Mood To Shoot This Year

Oders Given For Probe On Sushant’s Death

Anchor Suma Salute To All Nurses

Anushka Waiting For The Right Person!